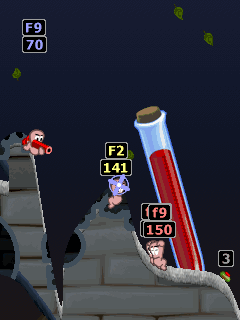 Alt-F4 is a competitive ground scheme where your worms are limited to only using weapons from the F-key row they are named after.

Alt-F4 is a highly strategic member of the F-key family of schemes, where worms are only allowed to use weapons that appear in the weapon panel row that the worms are named after (F1, F5, F9, F12...) as well as, in the case of Alt-F4, anything from the F8 row, any utility from the Util. row, and Skip Go. Best of 3 matches are played on random island maps between six 150 HP worms a side, with turn order set to cycle between them randomly. After the 15 minute round timer runs out and sudden death arrives, all worms are set to 1 HP, but water does not rise. Weapon powers in the scheme are set to the standard 3 stars, including the Ninja Rope, giving it a single reshoot, but with rope knocking (and by extension Bungee knocking) disabled.

Because the way in which individual rounds play out depends in large part on what worms (F-keys) appear on the battlefield, the scheme allows for an ever-evolving metagame to develop, even without any changes made to its scheme file. Through this mechanism, it is the players, via their choices, who in the long run decide which F-keys are expected to see more play because they just seem individually strong, which ones might only be niche inclusions intended to surprise opponents, which ones warrant going out of your way to kill off early, which ones could potentially be more dangerous in the hands of specific players, or as part of specific team compositions, or on specific maps and so on.

The following "rules" are enforced by the scheme file itself, as of Worms Armageddon 3.8:

On a fundamental level, offering a rough outline of what to expect from Alt-F4 and some guidance on constructing your team, the F-keys appear to fall into a few categories that are distinct both in what they theoretically offer to a team composition, and in terms of how including them usually tends to play out in practice.

Early game heavy hitters that are potentially very strong early, but prone to falling off in power when rounds drag on:

Consistent all-arounders that are generally good at all stages of the game, but do not obviously excel at anything:

Late game strategies and finishers that allow you to intentionally aim to take rounds late:

Synergistic supports and oddballs that don't do much on their own, but can shine in specific lineups:

Sometimes these categories end up overlapping slightly as well, depending on the details of the situation the worms find themselves in. But figuring out a team composition that is synergistic, not awkward in some crippling way and which simply works for you personally is by design a large part of becoming better at Alt-F4; experimentation, adaptability and experience thus all play an important role.

A purposefully nonexhaustive listing of suggestions for synergies that might be interesting to experiment with, and anti-synergies that should probably be avoided:

Here's some tier lists for now, to help keep track of what we have historically thought was good and not good: