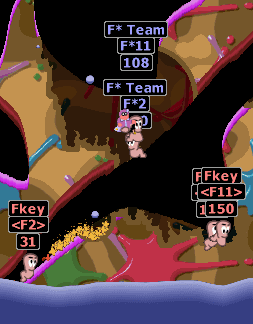 Fkey Strike is a class-based scheme where worms are limited to using only weapons from the Function Key (F1 - F12) row that they are named after, plus F8 and ` Utilities.

Each worm has a dedicated row.

Arsenal was designed so that (within reason) each row has 1 primary (inf ammo) and 1 secondary (x1 ammo) to spend.

Power is default (***) unless specified otherwise

Any worm may use

Created by Goom April 2019, with much help from Auto, GreeN, KRD, Schaf, Deadcode, and others.
Objective was making hybridization of Walk for Weapons's concept, Team17's positioning, and Hysteria's row simplicity.