(Redirected from Walk For Weapons)
Jump to: navigation, search
(Up to Schemes) 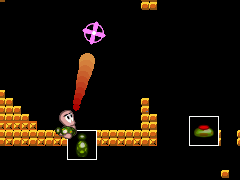 Walk for Weapons (or WfW in worms terminology) is a scheme that relies on specially-designed maps and a unique rule: a weapon may only be used by a worm if that worm is adjacent to a picture of that weapon.

The maps usually consist of a network of walkways connecting these picture boxes, which are placed in strategic locations relevant to the weapon they depict. Because the use of weapons is tightly controlled in this way, each map can possess its own unique strategies.

Players begin by placing their worms around the map. They can place worms anywhere, but the nature of the map can mean that some locations are far more valuable than others, and experienced players will put a lot of thought into their worms' positions.

After placement, players then proceed to attack each other by moving to a picture-box and using the depicted weapon. The scheme provides unlimited quantities of all weapons likely to be used in the scheme, but ultimately it is the map that controls what can and can't be used.

The map can usually be fully navigated by walking and jumping, but Parachute, Bungee, and Teleport are also provided - and like everything else, can only be used from a picturebox depicting them.

Creative modifications of the scheme.

The first generation of Rope for Weapons was played on 27th August 2008 at this WO tournament. It says the author of the scheme is "UISxxTom".

Attack with the weapon the rope is attached!

In this second generation variant (RfW), players use the Ninja Rope to move and in order to attack, players must attach the rope on a weapon sprite and use the same weapon it is attached to. TestStuff is usually recomended (it is common to see maps that encourage the use of the Indian rope trick).

The first map + scheme of the second generation was released in WMDB on 11th September 2009 by Apocalypse. Lei, sbs and Fastandfuri also contributed with maps.

The concept was originally devised by miner2049 and Squiffel made two maps using miner2049's idea. The idea was abandoned until Wyvern reintroduced it with a new map, uploaded to the Worms Map Database in April 2006.

The scheme has featured in competitions, appearing in the Worm Olympics every year from 2006 to 2015, and in cups hosted on The Ultimate Site between 2010 and 2017.