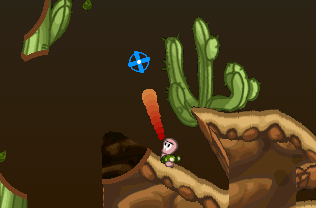 Bazooka and Grenades (BnG) is a scheme in which players must make use of their artillery skills to defeat their opponents, as the only weapons provided are the Bazooka and the Grenade, along with some transport and digging tools.

The scheme is usually played on randomly-generated maps, of a bulky, single-island format. For tournament games, maps that have been artificially edited to be symmetrical are sometimes used to ensure a fairer contest. The original-style Forest terrain is a particularly popular choice.

The game begins with players each placing their sole worm on the map, which more experienced players will often choose very carefully. Artillery mode is switched on, so worms cannot move unless they use one of the few available tools. Terrain can often restrict the shots that can be made, so precise location is important.

The vast majority of the game is then spent exchanging bazooka shells and grenades. Players must compensate for the wind - or use it to their advantage - when firing bazookas; a skill that can be quickly picked up by new players. The ability to predict a grenade's bounce and accurately judge its fuse time is also an important skill. Experienced players can use these weapons with exceptional aptitude, and it is often said that BnG is the best scheme for honing skills with these two weapons.

A few other weapons and tools are usually available. A few Girders are supplied, and most often used not for protection but for platforms on which grenades can be bounced. The Blowtorch and Pneumatic Drill allow worms to move a small distance, while Teleports are available for longer moves. Unlimited Low Gravity allows for low-gravity shots.

Most players agree to a set of rules which make the game more challenging by prohibiting shots that are seen as cheap or not in the spirit of the scheme. They are sometimes hard to enforce as they do not have strict definitions. BnG may be played with any number of rules, including none. The following is a list of known community rules.

A Sheep BnG follows similar rules, with the exception that a weapon crate drops every turn, and the 'all crates contain Sheep' cheat/WormPot mode is activated. Crates may be collected by teleporting onto them, but no sheep weapons may be used. The reason for the crates is that when a sheep-containing crate is destroyed, a sheep jumps out and blows up on contact with the landscape, making blowing up crates very deadly.

This variation has an important additional rule:

Attack From Jetpack (AFJ) - Players must always have the jetpack engaged when attacking.

BnG is played in a different way in Worms 2 comparing to WA. The maps are more ploppy, being compared to Holy War maps (blank maps) by some players.

This variation uses RubberWorm (or 3.8's ESO) features to make the gravity act at the center of the map, so the maps are usually a big circle at its center.

Plopper is a BnG variant scheme, in which the map is just like BnG, but divided in two parts and is played like Fort scheme: each player has a side and cannot cross the line of air on the middle of the map. The objective of the game is to Drown enemy worms, since God Worms (unlimited health worms) is turned on (so it is similar to Plop War too). The scheme also has some additional limited-supply weapons (like Banana Bomb, Petrol and Mortar), bringing flood when Sudden Death starts.

The origin of the scheme is unclear, but has existed since 2000 at the latest (as this archived version of team17 website shows].

It is thought to have been spawned in the original Worms game where some missions featured only these two weapons.

The scheme has featured consistently in competitions, featuring in every year of the Worm Olympics from when it started in 2006 to when it ended in 2016, and in cups since 2010 and tournaments since 2012 hosted on The Ultimate Site.