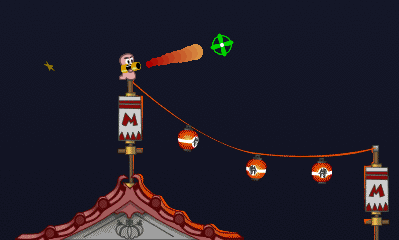 Stay on your fort and shoot the other one

Fort is a scheme in which two player (or two teams of players) each occupy one side of a specially-designed map. The map is usually symmetrical and styled as a pair of forts, castles or some other building. The two structures are often divided by water and players are forbidden from crossing the gap, so they must make use of their long-range weapons to defeat the enemy.

Worms World Party includes a number of fort-style art assets and a Fort gameplay mode. Teams can choose a preferred fort from this selection, and when a game is started in fort mode, the map is generated using the chosen assets.

Players begin by placing their worms on one side of the map. The first player to place a worm gets to choose which side to occupy, and all subsequent players must then make sure they place their worms on the appropriate side.

Players then make use of whatever weapons and tools they have at their disposal to kill the enemy worms, without invading the enemy position, which is usually forbidden. The weapons provided are typically not that much different from a 'normal' scheme such as Intermediate, though normally will forgo close-combat weapons unless invasion is permitted.

The original incarnation of this scheme allowed for invasion, but provided no Ninja Rope, forcing players to rely on Parachute to float across the gap between the forts. Several maps provided methods for attacking the enemy base directly (such as tunnels or a traversable no-man's-land), and these are best played with weapon schemes that offer high-damage "up close and personal" weapons such as the Minigun and Dynamite, or the various melee weapons.

This popular version of the Fort mode requires the map to include a piece of terrain styled as a 'flag' on each fort. Players win by destroying the opponent's flag.

In this version, each side of the map is a solid block of land (with some holes for worms to occupy at the start).

In this version, most weapons are delayed except for Girders or Girder Starter Packs, and players must spend the first few turns building their own fort. The map provides only two platforms for players to start on. An additional rule is enforced:

The concept was originally devised by Toast and postman in early 2000, and was first played on a map with a "briar patch"-like mess of terrain between the two forts. The scheme has since been included in several Worms titles as an official game mode.