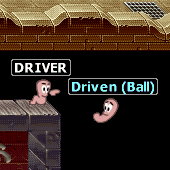 Only the driver can be controlled. The driven is like a "ball" and is constantly being pushed.

Driver is a scheme consisting in a race in which each player has 2 worms and it has to use only 1 of these to go driving the other throughout the circuit. The driven worm is like a "ball" and shouldn't move at all. It must reach the finish by the impulses that the driver worm may give to him, using any method and/or resource at its disposal (the driver worm doesn't necessarily need to reach the finish, if the driven reached it is already GG). Players must pay attention and remember which is the driver worm and which is the worm that cannot be controlled. Usually the turn time ends while the driver is being controled, so the next turn will start with the other worm, meaning that usually in the beginning of every turn the player must press TAB to change the worm before moving. The concept itself doesn't require multishot or RubberWorm, but the scheme was made with these RubberWorm features: sdet, ldet, fdpt, swat, antisink, version(158) (boom racing).

It is a scheme similar to Boom Race (being possible to use the same maps), but this time allowing the use weapons such as the Baseball Bat (Angle cheat glitch allowed), Dragon Ball, Fire Punch, Ninja Rope knocks, etc. The scheme also makes room to the use of combos, for example while the Holy Hand Grenade is preparing to explode, the driver worm can position itself on a spot to fire the Minigun while the worm being driven is in mid air due to the explosion, pushing it to another direction. The scheme also encourages the smart use of Low Gravity combining the two gravities any time the player desires (activating and disactivating it while the worm being driven is in mid air). Movement tools such as the Jet Pack or the Ninja Rope are used a lot by the driver worm.

The original map scheme has anchor mode to prevent accidental walking with the wrong worm by the players, but the author changed that into another scheme (the one available in this article) to allow the use of the Baseball Bat glitch which is useful on maps that are not so opened like the original. That map has the presence of scales or stages along the race, but it's just to vary things a bit. In Boom Race maps, which are quite suitable and can be used without any problem, only the basic rule STF should be taken into account.

The scheme was created by sbs, who is a professional driver in real life, and released on 2nd September 2014 along with a map on WMDB and also on a page of LeTotalKiller's Scheme Editor website. The scheme is a derivation of one task (#1) among other new ideas from the author's map Rubber Board II, released on 18th February 2014. The idea of playing with two worms on this map came because it was the second map of a sequence of Rubber Boards, the third (released on 3rd April 2014) is played with 3 worms per player and also includes a Driver task (#9). The fourth map of that series ended the tradition of its precursors and doesn't have 4 worms per player (only one). Note that Rubber Board II has a task (#6) referencing the map + scheme Baseball Race (released in 2009) by xDNCxGhost64x, which is also a game that requires 2 worms per player. Also, similar ideas consisting in races about pushing mines instead of worms already existed, like merlade's Mine Race (2010), Peti's Dud Mine Race (2011) and Skum's Take out the Mine (2012), this last one makes use of the Jet Pack a lot too. Moreover, Board Game tasks that force players to push mines already existed.