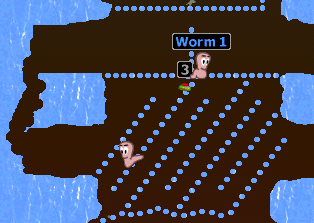 Navigate a labyrinthine map while setting traps for your opponents

Battle Race is a racing-style scheme where players must navigate their sole worm through a specially-designed, indestructible map to reach a finish line from a designated starting point. The player to reach the finish line first wins the game. A selection of weapons are provided that can be used to delay opponents.

With no transport tools available, players must carefully navigate the course by only walking and jumping. Some Battle Race maps contain elements that can be very difficult to pass, requiring exact positioning and precise jumps. They can even require such movement to be pixel-perfect for successful passage. Elements within a Battle Race map are often designed so that missing a jump will result in a fall, setting a player back to an earlier position in the course and requiring the player to re-attempt the element from the beginning. A map's difficulty lies not only in the precision required but also in how severe these setbacks can be.

Weapons are also provided in the Battle Race scheme, though they cannot be used to injure opponents, as worms are invincible (except to drowning, if the map contains such hazards). Instead, weapons are used to gain retreat time at the end of a turn or hinder an opponent's progress, by knocking them down from a climb or propelling them along a tunnel. Mines can also be placed to delay an opponent. In some cases, a player will use an explosive to blast their own worm forward if the terrain is suitable.

The weapons provided usually include the Grenade, Shotgun, Fire Punch, Dragon Ball, and Prod in unlimited supply, along with a few Mines and a single Baseball Bat.

Weapon crates are also provided, containing more powerful weapons that players won't have from the start, such as Dynamite, Sheep, or Holy Hand Grenade, or containing weapons that are likely to run out quickly due to their limited starting ammo. Towards the end of the game, however, crates will tend to accumulate in parts of the map that have already been traversed by all players, and will never be collected.

Battle Race is known to be a rather slow game, especially if there are more than 2 players participating, and a single round can take a few hours. In fact, it is - among some others - one of the longest games played.

It's generally recommended that players, when joining a Battle Race game lobby on WormNET, use the term "STF" (standing for Start To Finish) to indicate to the host that they understand the concept of the scheme and will follow the rules.

It is a common strategy to use fire punch or dragon ball to hit back the opponent, as it will cost the player some time - this ranging from a couple of seconds to even several turns, depending on the landscape - to get back the worm to its original location. A setback of this strategy is that it ends the attacking player's turn, so it is mostly used at the end of the turn, if possible, or if it sets back the opponent considerably.

Another common trick is to use the first shot of a shotgun to hit the opponent, and only use the second shot at the end of the turn, giving the player the retreat time as well. Although the shotgun doesn't impart as much momentum as the fire punch or dragon ball, it has the advantage that it can be shot from a much greater distance, the topology of the map permitting.

Mines are usually used to block the path of the opponent, but only achieve this where the opponent can't simply jump over it and escape the blast. They are mostly used in narrow tunnels, where even if the worm is able to walk back to a safe distance after triggering it, will still be delayed by several seconds. To counter this, mines can be hit or shot away from the path, or sometimes its blast can be used to move the worm forward, at the cost of losing the turn.

"Mine walking" is a trick where a player drops a Mine from a height and then walks off the cliff after it, landing on the bouncing mine, using it as a stepping stone on descent, and so not losing the turn to falling. Although dropping a mine still ends the player's turn, the retreat time can be used to make more progress than if the worm had simply walked off the cliff. For this trick to work, a wall must be present in front of the worm attempting the trick, off which the mine can bounce, slowing its descent and thus allowing the worm land on it mid-air. This trick requires practice, good timing, and a bit of luck.

The name Battle Race was probably used because of the weapons that can be used to delay the opponents. However, some players (mainly with those played in tournaments) use a variation of the scheme, mainly for tournaments, with no weapons. This allows players to compete without interacting with each other.

This can also be achieved with special maps with parallel courses example.

In this variation the players are equipped with infinite Low Gravity, which can be turned on and off anytime and as many times as the player wants. This variant was introduced during the Winter Worm Olympics 2008, with some maps resembling Jetpack Race maps.

The origins of Battle Race trace back to the Worms 2 days, with rudimentary tunnel maps designed for Worms to navigate through. What is now known as the modern Battle Race was pioneered by GARG0YLE, who created the first BR maps for W:A with indestructible terrain and weapon sets, with the purpose of racing through obstacles while hindering the opponent with the weapons at the players' disposal. The only rules for the scheme were to start on the designated start area and not to use skipwalking. Killing all the opposing worms or arriving at the finish first resulted in a victory.

Players that had a hand in creating and honing the scheme, as well as designing maps, include NZkiwi, Foxylady, RaptorStrike, and Silentworm. The early maps were broad tunnels created in the in-game editor, but the use of MS Paint soon allowed for the creation of complex obstacles.

Deadcode's testmap, demonstrating a vast range of pixel-perfect map elements that can be included in a Battle Race map.

One of the W:A maintainers, Deadcode, is also a battle race fan and designed a pixel-perfect template that tested the very limits of the jumping mechanics in W:A, further advancing map creation for the scheme. Today, many of the maps feature these pixel-perfect jumps that require precise positioning and knowledge of the in-game mechanics. Focus on this has made the scheme less battle-centric and more centered on complex jumps.

Battle Race has consistently remained a popular scheme for competitions.

In 2010, the Battle Race scheme was officially adopted in a major league for the first time by The Ultimate Site as part of its free league. Before that, two Battle Race-specific leagues existed: GARG0YLE's Battle Zone was created by Silentworm in 2001 but was short-lived, and Battle Race League, was created by Bloopy in 2004. The latter enjoyed the most league play the scheme had ever seen across both W:A and WWP.

More recently, Battle Race has featured consistently in the Worm Olympics between 2006 and 2016, and in tournaments and cups on The Ultimate Site between 2015 and 2018.