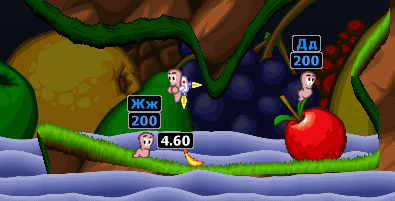 The soft fruit of doom.

Banana Zone is a scheme centred around the use of high-powered Bananas and Super Bananas, with no other weapons provided. As these weapons are highly destructive, worms are killed quickly and a round lasts just a few minutes.

In addition to unlimited Bananas and Super Bananas, the scheme provides a small selection of transport tools, also in unlimited quantity - the Ninja Rope, Jet Pack, and Teleport. Low Gravity and Blowtorch are also provided.

Players typically drop their bananas from the jetpack, using it to escape the subsequent blast.

The origin of the scheme is unknown but it has existed since 2006 at the latest, and was included in that year's Worm Olympics.

The scheme has featured occasionally in competitive play, appearing in the Worm Olympics in 2006 and 2010 and in a cup on The Ultimate Site in 2012.