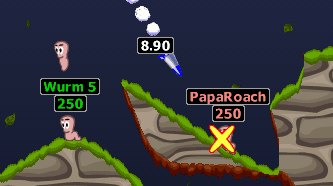 HominG is a scheme centred around the use of homing weapons such as the Homing Missile, Homing Pigeon, and Magic Bullet.

In addition to the three homing weapons, and Aqua Sheep, which are all provided in unlimited quantity, a small selection of super weapons is present too - the Armageddon, Nuke, MB Bomb, Sheep Strike, Scales of Justice and Freeze. The more powerful weapons are on delay, with only the Homing Missile (and utilities and transport tools) being available on the first turn.

Rounds typically become more and more destructive as the more powerful weapons become unlocked. Worms usually die by drowning, as they start with 250 hit points and can become even more resilient by collecting the health crates, which provide 250hp each.

The scheme is typically played with the following rule:

The origin of the scheme is unknown but it has existed since 2006 at the latest, and was included in that year's Worm Olympics.

The scheme has not featured in any competitive play since.