Capture The Flag (or CTF in worms terminology) is a scheme in which two players, or two teams of players, occupy one side of a specially-designed map and must destroy one or more designated flags on the other side. It is similar to the Fort scheme, except that players are allowed to cross the map ('invasion' of the enemy's fort is typically disallowed in Fort). A win can be obtained by either destroying the flag(s) on the opposing team's fort, or simply killing all their worms. 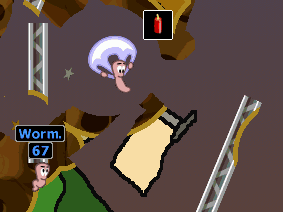 Win the game by destroying the enemy's flag

Players begin by placing their worms on one side of the map. The first player to place a worm gets to choose which side to occupy, and all subsequent players must then make sure they place their worms on the appropriate side. The map usually indicates a particular starting position for the worms, so players do not have the freedom to start on any part of their side of the map as is the case in the Fort scheme.

Players then make use of whatever weapons and tools they have at their disposal to destroy the enemy's flag. This flag is part of the terrain and is usually a clearly-marked feature of the map. Typically, the entire flag must be destroyed. Depending on the design of the map, it can be unclear which pixels do and don't constitute part of the flag, and clarification can sometimes be needed. The flag may vary in size according to the map, sometimes requiring only one shot to destroy it and sometimes requiring several. More than one flag may be present, in which case players are usually required to destroy all of them.

A team can also win by simply killing the enemy team's worms.

The weapons provided are typically not that much different from a 'normal' scheme such as Intermediate, but the tools provided, particular transport tools, are much more restricted. Although Capture The Flag schemes vary considerably in detail, the scheme will typically only make the Bungee and Parachute available to help traverse the map, along with the Blowtorch and Pneumatic Drill to dig through obstacles and Girder and Low Gravity to aid climbing and span chasms. Fast Walk can also be included.

Often, the Dynamite is a particularly useful weapon, as its blast radius is high enough to destroy a flag in one attack.

Following the increased limit on map dimensions introduced in Beta Update v3.6.28.0, some players play Capture The Flag on far larger maps. These maps have no special alterations - they are simply scaled-up versions of regular CTF maps, usually to three or even four times the standard size.

These maps magnify almost every aspect of the game. Traversing the map becomes an epic journey, and destroying the scaled-up flag can take many turns. Team co-operation becomes even more crucial as players find themselves needing to co-ordinate their individual movements into larger strategies. Games can take up to two hours, with players not even making enemy contact until well after the first half hour.

Schemes are often altered to compensate for the immensity of the maps. Worm health is increased, particularly to deal with excesses of fall damage. Baseball Bats and Dynamites are provided in quantity to aid with long-distance travel, as is the Low Gravity utility to amplify the effects. Infinite moles provide a means to dig and climb through large blocks of terrain, and an increased number of girders help players span vast cavities and ravines as they move across the map.

On these bigger maps, the short turn time seems even more restrictive. Even relatively short journeys can take several turns, and for this reason it can become difficult for a player to react to a new development and send his worms to deal with the situation. It also makes it much more difficult to stage an invasion by parachute, as large chasms can easily extend beyond the distance that can be reached by 30 seconds of parachuting.

The parachute however can still be used to go a long distance, offering a major advance into enemy territory that the enemy may not be able to respond to quickly, owing to the short turn time. Even if the enemy can parachute down themselves or fire artillery from above, using invisibility during the invasion will make it difficult to repel the intruder.

On such large maps, height becomes a major advantage and is sought after by both teams. The ability to traverse the map quickly to react to events is strategically important, and since descending is so much easier than climbing, having altitude gives players greater mobility and access - not only for redistributing worms but also for launching parachute invasions. In addition, a high enough vantage point can be completely out of range of projectile weapons, which simply cannot be thrown hard enough to reach the distances required on such broad maps.

Sometimes teams will split up to deal with localised threats, resulting in what seems like two or three completely distinct games playing out on the same map.

The origin of the scheme is unknown, but dates back to 2004 at the latest, when the earliest known map for this scheme was uploaded to the Worms Map Database in February of that year. It is likely much older and probably developed as a variation of the Fort scheme.

The scheme is not known to have seen much competitive play, but has appeared in the Worm Olympics in 2006 and 2011.