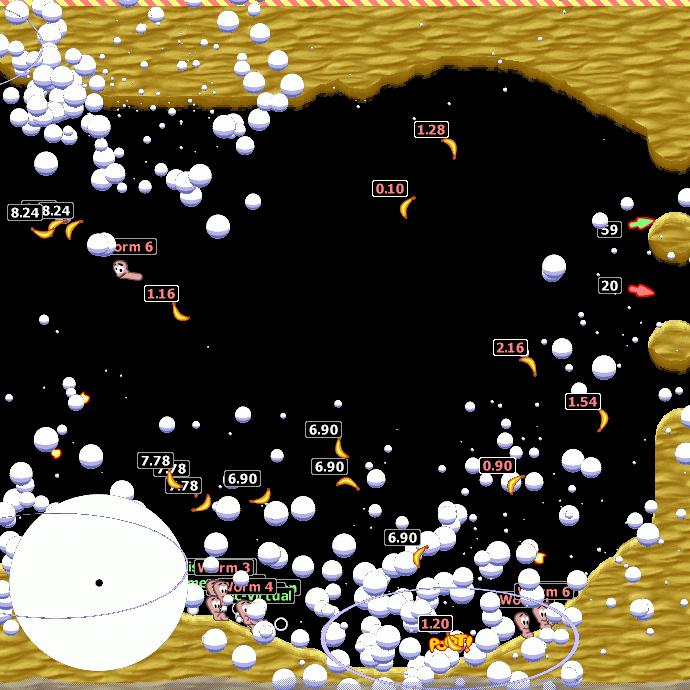 Here the player was trying to blow worms outside with the help of 30 bananas. 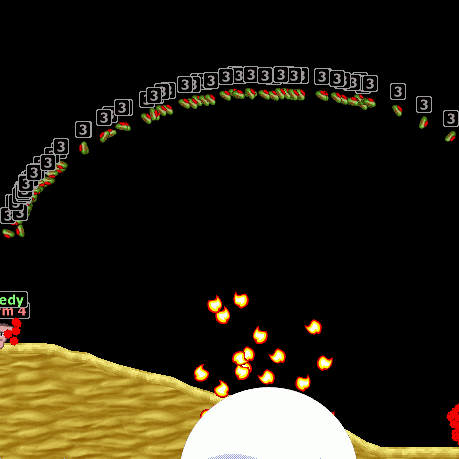 A mine wave "trick" which is caused by placing as many mines as possible and then a dynamite over them.

WeaponXpress is a Full Wormage like scheme, but with indestructible terrain and shot and loss of control doesn't end a turn. The worm energy is infinite (God Mode) so the only way to kill the worms is by plopping them. Since water is not accessible inside the shown area of the cavern, you have to blow worms outside through one of the small holes on either the left or right side (or both) of the cavern.

For that, the host has to generate a random one-layered cavern and close the sides by drawing walls there. Then he adds small holes to these sides.

All weapons are available, except:

All weapons are extremely overpowered due to power settings outside the normal range (the scheme has been edited with SchemeEddy). Additionally the effect of the weapons can be doubled by collecting an Utility Crate with Double Damage; Utility Crates are dropped between every turn (100% Utlity Crate drop chance).

With these settings, it probably sounds easy to push worms through the holes in the cavern side, but (depending on how big these holes are) this isn't easy though.

The RubberWorm settings normally used are:

Optionally, the following settings can make the game more interesting:

Teststuff can be enabled but is not actually needed to play the game.

A variation of this scheme was created: Nanageddon (this time the terrain is destructible).