(Redirected from Proper)
Jump to: navigation, search
(Up to Schemes)

Roper, or Pro Roper, also known as Proper in worms terminology, is a classic rope-based scheme in which each turn, the active player collects a health crate (usually curing a value significantly lower than a full damage bazooka attack), then attacks other teams with the given infinite weapons (bazooka, mine and grenade). Given the short turn time (commonly 15 seconds), skill with the use of the Ninja Rope is advantageous. The water level is set in a way that allows weapons to sink through the bottom border but worms remain standing on it, a setting known as Water drops. This makes it difficult to quickly use a mine or grenade on a worm standing on the bottom of the map, but bazookas still explode on impact. 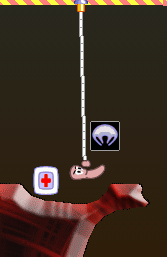 In Worms 2, Roper is played with some differences from W:A. The first is the Ninja Rope that has a higher acceleration than WA rope, so the turn time is 12 seconds. The terrain is destructible and the retreat time of the rope is 5 seconds (half than W:A). There is delay in all weapons for 1 turn and there is neither "Bazooka First" rule, nor maps with Water drops. Many "W2 Roper" players migrated to WA as a community that still play roper this way, using RubberWorm feature to simulate W2's Ninja Rope perfectly in W:A.