One of Everything is a scheme that provides players with precisely one of every weapon, with some of the more powerful weapons being delayed by a few turns. Three rounds must be won to win the match, and anti-stockpiling is turned on, so players must make their limited arsenal last for the entire match. 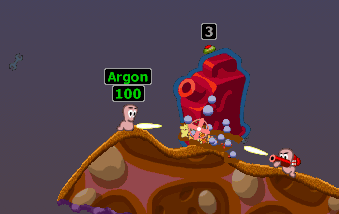 When all you've got is one of everything, you just have to use whatever will do the job.

This scheme encourages players to make the most of what they've got. Using the best weapons early on might give a player an early lead, but it might leave them without the tools to do the job in later rounds. Each turn players need to quickly decide how to kill the most enemy worms at the smallest cost to their weapons stockpile.

Despite the full range of highly destructive weapons, this scheme can result in a strategic match and the pace of play quickly changes throughout. Early rounds tend to be violent and chaotic as players try to grab early wins with the most powerful weapons, while the final rounds see an interesting battle between vastly different weapon stockpiles, shaped by what the players have already used in the rounds that have gone before.

Rapid flooding at Sudden Death prevents stalemates - for those occasions where players just have nothing left.

The scheme is best played with just two players. Additional players increase the total number of weapons in the game, and to compensate for this the game needs to be lengthened with extra rounds.

There are of course thousands of strategies involved with getting the most out of each individual weapon. But there are also a few big-picture strategies unique to the scheme that players can use to help them win the match:

One of Everything was created by Run in November 2005 at the latest, and although the idea has probably been around for a lot longer, this particular scheme is the only known version.

The scheme has featured in competitions, featuring in the Worm Olympics every year from 2010 to 2016 (except 2011).