Jump to: navigation, search
(Up to Schemes or Bow and Arrows) 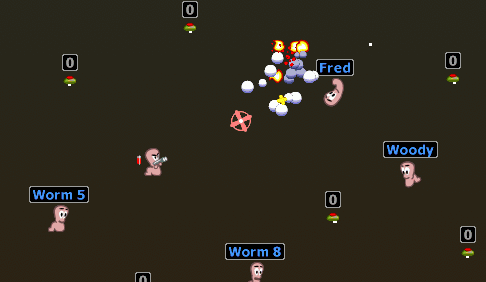 Mine Madness or MM is a scheme played on specially-designed maps which consist solely of a random arrangement of specks or small objects, covered with 250 instant mines. Worms are typically killed by drowning, as there is little to stop them when they start falling after being hit by a weapon or by falling on a mine. A small selection of weapons are provided, mostly firearms, putting an emphasis on aiming skills.

Shotgun, Handgun, and Longbow are provided in unlimited supply, along with a single Minigun. Unlimited Kamikaze is also provided.

A full set of transport tools are also available. Ninja Rope, Jetpack, Low Gravity, Bungee, Parachute and Teleport are all provided in infinite supply. However, using them at the beginning of the game is near impossible due to the high density of mines, and can remain risky throughout the game even when most mines have been detonated.

The game usually starts with a period of chaotic destruction, as the mines are detonated by worms sent falling by opening shots. Chain reactions are common, as worms are flung across the map, knocking other worms. A series of detonations can easily propel a worm sideways across the map or even back up the map. The design of the map can have a big effect on the potential for chain reactions. If the specks of terrain are close enough that the explosion of a mine can knock nearby worms or mines off their own specks of terrain, chain reactions are much more likely and the opening turns are far more destructive.

As the gamer progresses and fewer and fewer worms are left, shots typically require ever more accurate aiming for successful kills.

The scheme is sometimes played as a "No Rope" version, where the Ninja Rope has been removed.

The origin of the scheme is unknown but would have been created after the v3.6.28.0 Beta Update released in 2007 allowed up to 250 hazardous objects (mines and oil drums) to appear on a map, instead of 8.

It may have been inspired by the Bow and Arrows scheme, which similarly uses speck-filled maps and which also made use of the increased hazardous object limit after v3.6.28.0.

The scheme has featured consistently in competitions, appearing in every Worm Olympics from 2010 to 2016, and may have appeared in earlier years. The scheme has also featured in cups and tournaments hosted on The Ultimate Site between 2012 and 2018.