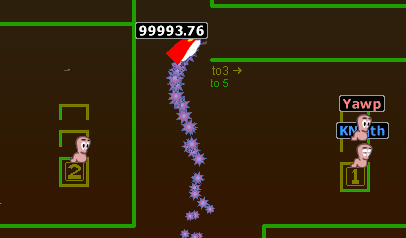 Super Sheep Race (or SSR in worms terminology) is a Super Sheep-based racing-style scheme where players must complete a series of challenges on a specially-designed map, each challenge requiring players to launch a super sheep from a designated launch platform and fly it to a target, usually the launch platform for the next challenge. The player to reach and complete the final challenge on the map wins the game.

Players begin by placing their one worm at the launch platform for the first challenge. The platforms are usually designed to confine the worms and prevent them falling, while still allowing them to launch their super sheep via a small hole. Players then take it in turns to try and hit the target for that challenge with their super sheep. If they succeed, they can then use their Teleport to go to the launch platform for the next challenge. Each challenge is numbered throughout the map, and typically get more and more challenging towards the end.

Worms are given infinite health so that they cannot die to the blasts from the super sheep.

The first player to reach and complete the last challenge wins the game.

Creative modifications of the scheme.

A mixture of Super Sheep Race and Fort schemes. Maps are similar to SSR, but it is a battle game and each player starts on their own specific place of their base.

Acording to this archive snapshot from 26th August 1999, a scheme called "Super Sheep Racing" (created by smShnarf and FuzzyWink) used to be played in Worms 2 somehow like WA's Sheep Fort scheme: there was no Start and Finish spots, but dead ends of a maze map where the worms should be placed. The damage of the sheep is reduced in order to avoid shortcuts destroying the map and the objective is to kill enemy worms without leaving the starting zones and always activating the sheep flight right after its drop.

Super Sheep Race was released on 26th March 2004 by the author of the scheme: Red Wraith. The first maps of this scheme can be found here, being this the very first one. The 6th was the first SSR map uploaded to the Worms Map Database on 3rd June 2004 by a different author: TonY. Cueshark was an important diffuser of the scheme, once the 5th map of the scheme is dedicated to him, and he made many maps and videos for the scheme. Other players contributed making numerous maps, notable examples are: BigBilly, KirA, D4RKST4R, MagiC, SiD, Enni and Kirill-Gamer.

The scheme has featured consistently in competitions, featuring in the Worm Olympics every year from 2006 to 2014.