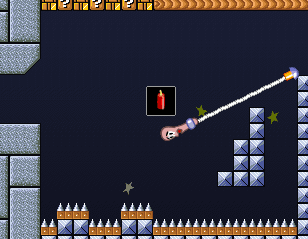 Bungee Race is a Bungee-based racing-style scheme where players must navigate a specially-designed map, using only the bungee, to reach a finish line from a designated starting point. The player to reach the finish line first, or in the shortest time, wins the game. Because the bungee can be used to 'fling' a worm rather than merely descend, maps are designed to require this skill.

Maps are designed to contain a series of 'chambers'. Each of these chambers contain at least one bungee challenge, where a worm can hang down from with the bungee and then try to gain enough velocity to fly to the next chamber, or to the next bungee challenge within that chamber. The chambers typically get more difficult along the race course, requiring ever more precise skill with the bungee to perform the required manoeuvre. Occasionally, a chamber may have more than one solution, or there may be shortcuts available that can be exploited by especially skilful use of the bungee (which may or may not be a deliberate feature of a given map).

Unlimited Dynamite or Mine are provided, allowing players to gain a few seconds of retreat time to continue their bungee efforts. Dynamite is a more common addition, as the mines will often persist on the map and become an awkward obstacle. Because worms have unlimited health and the map is indestructible, these weapons have little effect, but the blast can sometimes inadvertently propel a worm to the next chamber. The weapons should not be used for this purpose, and should it happen, the worm must backtrack to its previous position before continuing. Often, the scheme is externally edited to give these weapons a power setting of 0, so that this blast effect is not possible.

Unlimited Fast Walk is provided, so that players can progress quickly to the next bungee point.

Unlimited Teleport is also provided, for cases where a worm gets stuck and is unable to progress, or where a player has accidentally used a forbidden shortcut (for example as a result of a dynamite or mine blast) and must backtrack but can't do so by walking and jumping. In some cases, part of the map may be designed in such a way that failing one particular bungee challenge in a series will result in the player having to start that series again. If players agree, the teleport may be used to skip bungee challenges that have already been successfully navigated.

It's generally recommended that players, when joining a Bungee Race game lobby on WormNET, use the term "STF" (standing for Start To Finish) to indicate to the host that they understand the concept of the scheme and will follow the rules.

Bungee Race was first invented by Worms 2 players Machina and Wicked Clown in 2002 at the latest. In approximately April 2003 it was independently created in Worms World Party by Squiffel, who was going by the nickname Lyndon at the time (source). He initially called his scheme Bungee Battle Race, but others quickly simplified it to Bungee Race and popularized it on Worms Armageddon. The earliest color Bungee Race map appeared on Worms Map Database in February 2004 (but was originally created in mid 2003).

The scheme has featured consistently in competitions, featuring in the Worm Olympics every year from 2006 to 2016 (except 2013), and in cups and tournaments hosted on The Ultimate Site between 2013 and 2018.