Jump to: navigation, search
(Up to Community)

Worms Clan Council is a website for the Worms community.

Its purpose over the years has changed, as have the clans found there, not to mention the domain the server it was hosted on.

It is hard to work out when WCC was originally started, as all records of its original form are all but gone.

It started, at an unknown date, on EzBoard as a forum that hopefully would have a couple of clans from WWP hosted on it, purely to save the hassle of visiting lots of forums all the time, at this point it was called the 'Worms Clan Academy'. 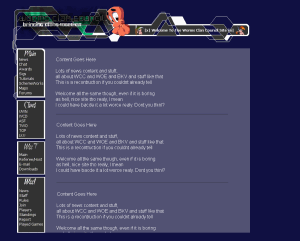 Later, in 2001 (I can only assume, this is the only date archive.org give me for the original domain wormsca.f2s.com, but the page is not available) a website was built, and shortly after the unsuccessfully EzBoard was replace by a VB forum and version one of Worms Clan Council was born.

This was still trying to be a forum where lots of clans can live, but it was built on a communist/diplomatic system, when each clan registered the clan leader became 'part of the council', granting them super moderator status over the forums and website. This.... didn't work very well. Some clans with more than one leader ended up with more power than others, and some clan leaders were not trust worthy enough to be super mods. So the system was scrapped.

Of course, fighting aside, the domain no longer made sense so was switched to www.wormscc.uni.cc, although hosting was the same. This ran as it was for a year or two until the purchase of www.wormscc.com, the data was simply copied over, but by this point there were three levels: Admin, owner of the site, and occasionally one other trusted member to help. Council, normally leaders of clans, but only those who were known by others to be trustworthy, Clan Leaders - lead a clan hosted on WCC but not yet in the council, have full mod rights only over their own part of the forums. For the most part the system worked well so had stayed. 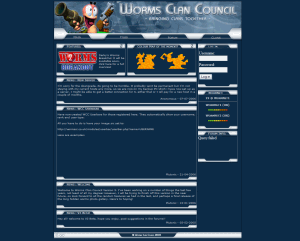 After another few years the webspace became insufficient, so wormscc moved to the markindustries server. For this the site was rebuilt and version 2 was born. V2 was a nice looking site, it was however, horribly cluttered and resource heavy. Eventually, when it came to moving the wormscc.com domain to another registrar there were.... complications. Rather than spending vast amounts of time trying to solve them, wormscc.co.uk was bought instead and wormscc was moved again to another host, this time bought by me, lucidweb.org. The site was again rebuilt into version 3. V3 is a much simpler design and despite being in a permanent BETA state, ran well for another 2 years before going under on the 18th July 2006.

Worms Clan Council now runs on a server in Plutonic's bedroom, and so far is running well. The clans currently hosted are as follows:

Other than forums, the site hosts a number of programs mentioned on this wiki and many maps and missions of various types.