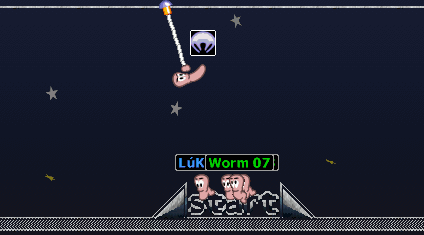 He takes the declared flag!

Wascar (derived from "NASCAR") is a Ninja Rope-based racing-style scheme in which players must use the ninja rope to navigate around a track on a specially-designed map. The scheme is very similar to Rope Race, except that the race course is designed as a circuit, is generally more simple in design, and multiple laps around the track are required to win. The first player to complete the required number of laps is the winner.

Players begin by each placing their single worm (or in some cases, their 3 worms) on the designated starting location. They then use the Ninja Rope to navigate around the course, completing as many laps (passing the starting line) as possible in the given turn time.

The number of laps completed is tracked using messages in the chat. Players will keep track of their own lap completion and that of others. The first player to complete the required number of laps - which is usually agreed upon between the players at the start of the game - wins the game. However, the winner may have had the advantage of an extra turn, due to turn order. In this case, other players who are a turn behind are allowed one more turn, and if they meet the lap requirement, the round ends in a draw.

The map is indestructible and no weapons are provided. Worms have infinite health, but some maps are designed with gaps along the bottom to provide a drowning hazard. If a player loses all their worms to drowning, they will be unable to complete the required number of laps and so automatically forfeit the game.

The origin of the scheme is unknown. The scheme dates back to 2004 at the latest, with the earliest Wascar map appearing on Worms Map Database in February of that year.

The scheme has featured consistently in competitive play, having appeared in every year of the Worm Olympics between 2006 and 2016, and in cups on The Ultimate Site between 2011 and 2018.