Jump to: navigation, search
(Up to Schemes or Rope Race)

Trick Race is a racing-style scheme that requires players to complete a series of challenges on a specially-designed map, and win by completing the final challenge. Each challenge involves performing a particular tricks with the Ninja Rope. 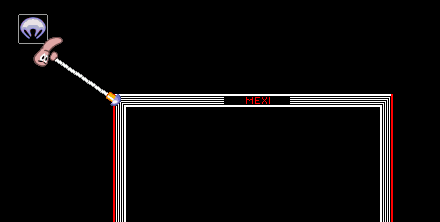 They then take it in turns to complete the first trick. The tricks are labelled on the map, and usually include coloured lines to indicate where the rope must be attached to start and end the trick. If the rope was not attached to the lines, the trick will not be considered valid.

The player may attempt to complete as many tricks as they can in the turn time available. The tricks must be completed in order.

The winner is the first player to do all the tricks and arrive at the designated finishing point on the map.

It's generally recommended that players, when joining a Trick Race game lobby on WormNET, use the term "STF" (standing for Start To Finish) to indicate to the host that they understand the concept of the scheme and will follow the rules.

In this variation, players have unlimited turn time to complete all the tricks on the map. The total time taken for each player to reach the finish line is noted, and the player to have used the least time wins the game. Time-trial trick race maps are usually smaller, with fewer tricks.

Trick Race was created by Stratovarius with his map "Stratospecial" in 2001. At the time it was merely a special Rope Race map, but the concept evolved in to a scheme of its own.

A notable Trick Race contributor is Fluffy, whose classic trilogy of maps - Fluffy Trick Race (2009), FluffyTrickRace2 (2010) and FluffyTrickRace3 (2010) - is probably the most known and most played in WormNET, thanks to the replay files which Fluffy created to demonstrate how to do the tricks.

Trick Race has often featured in competitive events, appearing in the Worm Olympics for the years 2011 and 2012, and appearing consistently in cups on The Ultimate Site from 2015 to 2020.