Trench Warfare is a scheme played on a specially-designed map which exploits the crate spawning algorithm. The map is indestructible and comprises a series of tunnels, with special 'drop-zones' being the only places where crates can appear. With only a few weapons initially available, securing these drop-zones to gain access to other weapons becomes a key objective of the game. 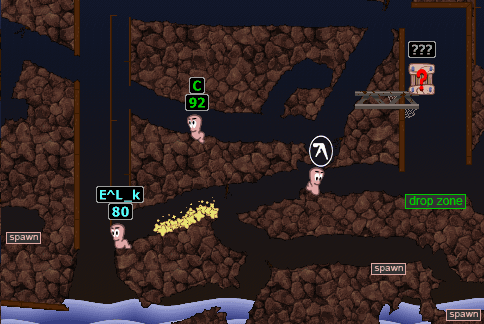 Players start by placing their worms on the map at the designated starting points. There may be many of these around the map and players can choose any of them, as long as another player hasn't already placed a worm there.

Players are provided with powered down Mines and Petrol Bombs in order to block tunnels. Most of the weapons supplied in crates are powered up so that they are capable of delivering at least 60 points of damage, which is done to encourage the use of the mines and petrol bombs to secure the drop-zones.

The crate spawn probability is set beyond the standard maximum to discourage the appearance of Select Worm, although players do begin with 2 of these.

The scheme was created by Melon in late 2007, with his map for the scheme being uploaded to the Worms Map Database in November of that year.

There are two original versions of the scheme, the standard version, and a skipwalk version, which has a shorter turn time and encourages the use of using the Skipwalking glitch.

The scheme is not known to have featured in any competitive events.