Jump to: navigation, search
(Up to Tricks and glitches (Second generation)) 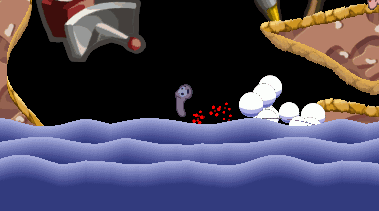 This may happen to a skimming worm, or a weapon (such as Grenade) hitting the bottom border of the level when the water is at water drops level. The glitch probably happens because the check that adjusts an object's collision properties uses different logic than the one that causes objects to sink - or that the latter check happens one frame after the former.