Jump to: navigation, search
(Up to Weapons (Worms Unlimited)) 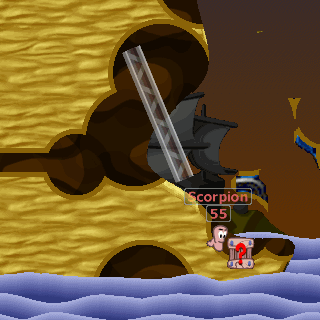 Semi-transparent to the team that placed it, completely transparent to all other players. It is placed just like a standard girder.

Invisible sections of land? Whether that's possible in the Worms engine or not is unknown. Other than that, this weapon has no other possible programming problems.

The uses of this girder are limitless, but it will probably end up being used in a darkside manner rather than any other. It could be placed to trap enemy worms into very tight spots, such that they could hardly turn around. And the enemy wouldn't even know until he selected that worm and tried to move him. Is there a solution? There could be. There is never a solution to the darkside use of girders, but you could make the girder visible to worms in close contact with it. It would still remain invisible to other teams, though.

Apart from that, this weapon has many beneficial possibilities. You may wish to create a bridge that other players wouldn't know was there, allowing you access without giving the enemy the same opportunity. You may want to tempt an opponent to use a weapon by placing your own worm in the open, while having an invisible Girder in the way to prevent anything from actually happening. Perhaps you would want to build a ladder or base without the enemy taking advantage of it first, such as a landing platform to retreat to when sudden death strikes, or block off a territory and laugh as the enemy hits an invisible wall on the way to that crate. Even more humorous would it be if the opponent collides with it while swinging from a rope, or is hit by his own grenade after it being deflected back.

The possibilities are truly uncountable. Uncountable with fingers anyway.

Sure enough, the comical value of this construction tool far outweighs the potential annoyance and frustration it could cause.