Jump to: navigation, search
(Up to Software)

This version of the program "Global Tournament Moderator" (GTM) carries out a toss-up by a principle of equality of all participants. The algorithm of the program GUARANTEES absolutely reliable and impartial realisation of a toss-up of tournament. In the given version intended for fast tournaments, possibility of record and loading of tournament in order to avoid jugglings is off. 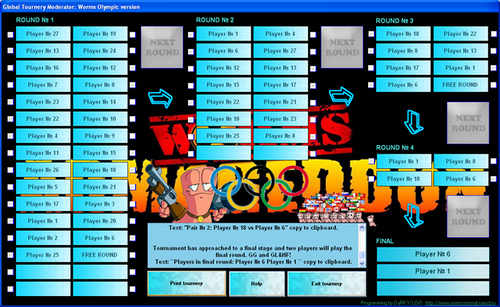 The program does not impose any restrictions to a moderator of tournament which has the right to mark or not to mark as won any player. This option is entered on a case of absence of players and etc. However, it will be impossible to allocate as winners of both players from pair.

GTM supposes a final round from two or three players as it usually practises on Worms Olympic.

GTM whenever possible does not reduce with each other players who have not been marked in the first screen by a tag (can host). However, if the quantity of players which cannot create host, exceeds quantity possible host players GTM tries to reduce to a minimum quantity of such pairs and warns a tournament moderator about it.

GTM allows pressing a name of the first player in pair to copy names of this pair in a clipboard for the subsequent insert in a game chat. Thus, the tournament moderator enters player names only once - in starting window GTM.

By pressing the button "Print Tournament" the program save an image of a window of tournament in a file on desktop Windows in file GTM_Tournament.png. The option with the "water" inscriptions rather complicating possibility of editing kept png of a file (in the graphic editor) unfair moderators is Thus realised.