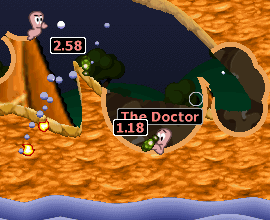 Drown your enemies with as many weapons as you can.

Drown Syndrome is a scheme that relies on the "shot doesn't end turn" feature of RubberWorm, that allows players to use as many weapons as they like in a single turn. However, the scheme also uses the "infinite health" mode, so worms can be killed only by drowning them. Ammunition is strictly limited and there are no crates provided, so players have to carefully conserve their arsenal while getting as many kills as possible each turn. Games tend to be chaotic and brief, clocking in at around 10 minutes.

66 seconds of turn time is generously provided, giving players ample time to kill opponents. But because worms have infinite health, players are required to get enemy worms into the water - where they will drown. Achieving this, especially in parts of the map where the water isn't easily accessed, is often not simple. Continuously firing weapons at an enemy to blow a hole right through to the water just isn't an option, because all weapons are limited (to just 6 of each) and many of the more powerful weapons are absent.

As a result of these settings, the game becomes a challenge of delicately balancing the need to conserve weapons with the need to drown as many enemy worms as possible every turn. Efficient use of weapons demands creative gameplay, with players reforming the map to generate tunnels and slides, then blasting enemy worms down them - or gathering enemies all into one pile before dealing the killing blow(s). Every turn brings with it the possibility of a unique combination of weapons.

Sudden Death occurs after just 6 minutes, bringing on fast flooding and ensuring that each round comes to a quick close even if everyone has used up their arsenal.

The lack of transport tools makes the game even harder, especially with the flooding of Sudden Death looming. Only parachute and bungee are unlimited. Girders are provided, as well as digging tools, but are limited to six just like almost everything else.

The ability to combine weapons in a single turn opens the game up to a number of novel strategies.

Modifications with relatively small detail changes to the scheme.

Experienced players may find that a turn time of 66 seconds is too long, and allows for too much death to be dealt each turn. For a more challenging match, lower the turn time to 36 seconds.

The scheme was devised by Run sometime in October 2008, shortly after RubberWorm introduced the "shot doesn't end turn" feature.

The scheme has featured in a cup on The Ultimate Site in 2016.