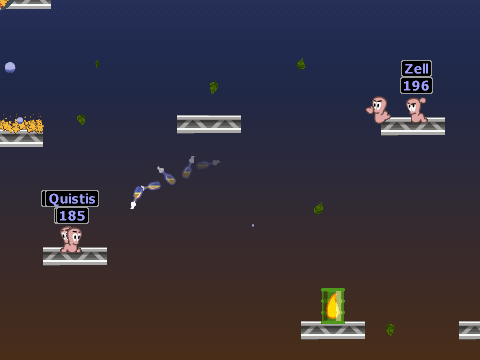 Burn your enemies with petrols!

Burning Girders is a scheme centred around the Petrol Bomb, with no other weapons available. It is played on a map consisting only of randomly placed girders. Worms typically die to drowning, as they can be easily swept off their girders into the water by fire. Barrels and health crates enhance this danger. The scheme places emphasis on artillery skills, but the luck of the wind direction also plays a major role.

Players begin by placing their worms on the map, which consists entirely of a random distribution of short girders suspended in mid-air. Players may find that they have to 'double up' and share a girder with another worm, if there are more worms to place than available girders.

When the round begins, players use the only weapon available - petrol bombs - to eliminate their opponents.

No transport tools except for a single Teleport is provided, so it is usually difficult to travel from one girder to another.

The scheme provides limited scope for strategy but there are a few techniques that players of the scheme will be familiar with.

The origin of the scheme is unknown but it has existed since 2006 at the latest, and has been included in the Worm Olympics every year from 2006 to 2016, often without variation. The scheme has also featured in tournaments hosted on The Ultimate Site in 2011.