(Redirected from BattyRope)
Jump to: navigation, search
(Up to Weapons)

Depending on the power setting, you may be given a number of repeat swings, this is done by pressing space to let go of the rope, then pressing space again to re-fire it while in mid-air. This does not use up extra ammo. If you dismount and touch the ground, any unused repeat swings are lost.

To set unlimited number of shots for a single rope (for playing roping schemes), adjust its power level to 5 stars in the weapon editor.

You can fire weapons from the rope by selecting them and then pressing Enter.

Rope knocking is a technique of moving another worm using a rope. It is done by gathering a momentum and flying off of the rope, making your worm bump into another. The advantage of rope knocking is that it is a great way of drowning worms close to the edge or grouping a number of them together and does not end your turn. You can use it even on worms immune from attack (due to rules restricting attacking the last player on some schemes). Some schemes are played with rope knocking on, while others forbid it.

Rope knocking is disabled in offline games by default. It can be enabled for offline play in Worms Armageddon in the Advanced Options screen, but will always be disabled during missions.

In online games, the presence of rope knocking depends on the WormNET channel from which the game was hosted - #AnythingGoes and #RopersHeaven enables it, while #PartyTime disables it. You can also use the wa:// protocol (see Footnote 3 of the ReadMe).

A good way to practice using the Ninja Rope is the Crazy Crates training. 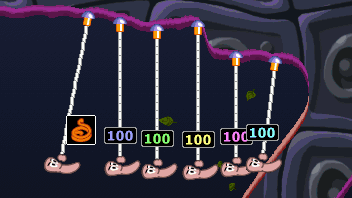 BattyRope is a game setting which allows the Ninja Rope to stay connected during other players' turns, and also forces Rope Knocking to be enabled. It can be enabled by entering "/batty" in the hosting lobby.