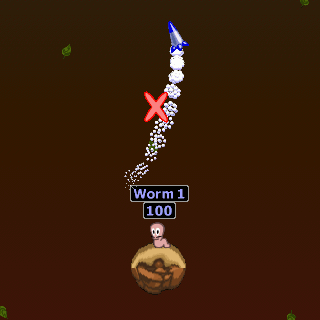 Russian Roulette is a scheme in which each player's worms (often just one) are positioned on a small piece of terrain and must kill the opponent worm with a Homing Missile or Pigeon. However, the worms must not be directly targeted - instead, the target for the weapon must be placed somewhere in a large space above the worms such that the weapon will continually orbit the target until it times out and drops onto the worm (or, more likely, into the water). The unpredictable nature of this attack lends the scheme its name.

The game begins with each player placing their worms on the map. The map usually includes instructions on where worms can and cannot be placed.

During the game, the players target the empty space above the map. The valid area where targets can be placed is usually indicated on the map. Players must fire their weapons at full power, and after 4 seconds of circling around the target marker, the weapon loses its attraction and falls down. If the player is lucky, the missile will land on and injure or kill the opponent worm. Or if they are unlucky, it will kill one of their own.

Low gravity is often provided as well. Sometimes the pigeon is omitted.

While the scheme is largely devoid of strategy due to its simplicity, there is a technique that players can use to increase their chances of a hit.

This involved firing a homing missile in the opposite direction to the target, giving the homing missile enough flight time that its homing mechanism times out just as it reaches (or just before it reaches) the target. This enables a player to more accurately control the flight path of the missile.

Maps designed for this scheme credit XShadow with its creation. The scheme dates back to August 2006 at the latest, when it featured in the Worm Olympics.

The scheme has featured consistently in competitions, featuring in most years of the Worm Olympics from 2006 to 2016, and in cups and tournaments hosted on The Ultimate Site between 2011 and 2018.