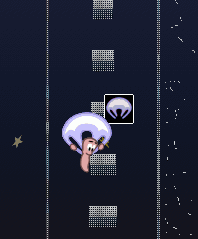 Climbing up with the parachute

Parachute Race (or Chute Race) is a Parachute-based racing-style scheme where players must navigate a specially-designed map, using only the parachute, to reach a finish line from a designated starting point. The player to reach the finish line first wins the game.

Maps are designed to contain a series of 'chambers' to be navigated by using the parachute, typically by climbing up or by progressing sideways along a series of small specks. Each chamber is usually designed symmetrically, so that it can be navigated regardless of which direction the wind is blowing on a given turn. The maps are also designed such that the strength of the wind has little to no impact.

It's generally recommended that players, when joining a Parachute Race game lobby on WormNET, use the term "STF" (standing for Start To Finish) to indicate to the host that they understand the concept of the scheme and will follow the rules.

The first type of parachute race was Worm Olympix, a Worms 2 scheme. The wind is disabled in Worms 2 by setting wind strength to 0% so no players are disadvantaged by undesirable wind directions, something that wasn't possible in Worms Armageddon. The scheme included the handgun weapon, suggesting the scheme's name was inspired by biathlon's inclusion at the Winter Olympics. Maps were typically drawn in the in-game editor, with climbs being more laborious as Worms 2 doesn't have backflips. Players get spare worms so if their worm drowns or dies, they can teleport back to where they were up to and continue.

Leet Lympix (sometimes also called Para Race) is a more challenging variation of the above that removes the handgun and makes it a pure race. Maps are more intricate and difficult, with more water hazards. Players typically only get one spare worm.

Worm Olympix was invented by Worms 2 players PaPa RoAcH and OxxyJoe in 2000 at the latest. Leet Lympix was developed by Ransom and BigBambu in 2001. Parachute Race was independently created by Bloopy (source) in Worms Armageddon at the end of 2002 or start of 2003, establishing the idea of symmetrical map sections needed in that game.

The first color map for the scheme was uploaded to the Worms Map Database by its author Zippy in November 2004.

The scheme has featured consistently in competitions, featuring in the Worm Olympics every year from 2006 to 2016 (except 2012).