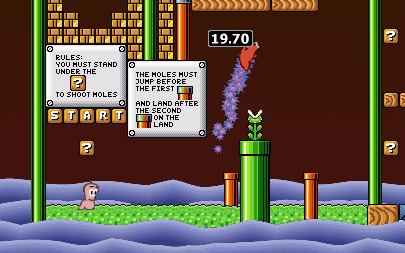 Mole Vaulting is a racing-style scheme that requires players to complete a series of challenges on a specially-designed map, and win by completing the final challenge. Each challenge involves launching a Mole Bomb from particular starting location, and such that it jumps over obstacles and impacts on a designated area on the ground.

Players begin by each placing their single worm on the designated starting location, which is usually the launching platform for the first challenge. They then take it in turns to release a mole bomb from that position, and attempt to launch it such that it clears the obstacles in that challenge. The player must launch the mole bomb before a particular, marked point on the map, and the mole bomb must impact on the ground after a second marked point. If a player succeeds, they can then move (using either the provided Ninja Rope or Parachute) to the launching platform for the second challenge. Each challenge is numbered throughout the map, and typically get more and more challenging towards the end. Low Gravity is provided for those challenges where it is necessary.

Worms are given infinite health so that they cannot die to the blasts from the mole bombs.

The first player to reach and complete the last challenge wins the round.

The scheme was created by DarkOne in July 2006 with his MarioVault map.

Mole Vaulting is not known to have featured in any competitions to date.