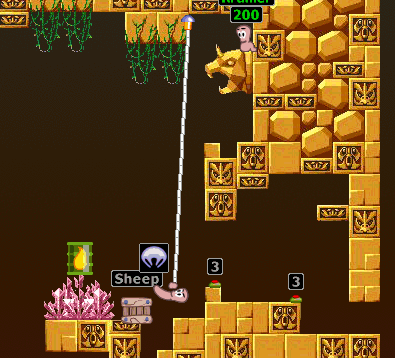 Use the rope and 'shop' for crates

Shopper (originally Rope Shopper) is a scheme in which players start with few or no weapons and must use the Ninja Rope to navigate a specially-designed, indestructible map and collect crates to build their arsenal. The scheme and its variations are generally the most popular schemes played on WormNET.

The goal in Shopper is to kill all opponents using weapons obtained from crates, collected within the relatively short turn time by using the Ninja Rope, which is provided in unlimited quantity and given a power setting of 5 to allow unlimited repeat swings.

Maps designed for the Shopper scheme provide a roof along the top and wide open spaces in which to swing around on the ninja rope, and typically include a large number of platforms, nooks and crannies where worms can try to stay safe from enemy attacks. Maps usually also include some hazards, such as holes at the bottom or sides of the map through which worms can fall and drown.

Considerable skill with the Ninja Rope is required for playing Shopper competently. However - unlike some of its variations, noted below - the classic Shopper scheme is very accessible to new players and suitable for practicing with the ninja rope.

The principle rules for Shopper are as follows:

These four rules are collectively known as the PACK rules (standing for Pile, ABL, CBA and KTC).

The ABL rule is often substituted with KTL:

Around 2000, Shopper started to adopt a rule which originated with the Roper scheme:

The combination of AFR and the PACK rules then became known as the proPACK rules. Throughout 2003, the AFR rule became so integral to Shopper, that the difference between PACK and proPACK was largely forgotten.

As well as the rules above, Shopper was sometimes played with additional rules prohibiting certain super weapons and the way that weapons can be used:

Shopper rules are generally addressed purely by the acronyms of the 3 fundamental rules - AFR, CBA, KTL/ABL; others (such as a the rules on the use of weapons above) are considered common sense.

Of all the schemes known in Worms, Shopper probably has the most variations. Because of its extensive popularity, many people came up with their own variations to the Shopper scheme, some better known than others. The variations often rely on the specific design of the map, and sometimes involve new rules. In some cases, variations require the use of TestStuff.

In this variation, an additional rule is in force: the player must touch a number of specified number of walls during their turn before attacking. This is played on specially-designed maps which highlight the walls to be touched.

In this variation, the map has an open roof and a large pillar in the middle. Players must fly their worms over the pillar at least once during their turn before attacking. For this, an additional rule is in force:

The rope may be attached to the central pillar before and after the crossing - e.g. when doing a special kind of fly called "mexi".

In Chamber Shopper, the map has an open roof and is divided horizontally into several chambers, typically 4 or 5, separated by vertical pillars.

The FBA rule (see Fly Shopper, above) is sometimes used in this variation.

Pod Shopper maps are designed with 2 or more 'pods', which may be considered miniature shopper maps in and of themselves. These pods are separated from each other by open space.

Players typically have to travel from pod to pod during their turn in order to collect a crate and to find a worm to attack. Pod Shopper games tend to be short, as drowning is more common. The common Shopper rules KTL and ABL are sometimes omitted to allow players to more easily find a target.

Played on regular Shopper maps, this variation makes use of an additional rule:

In Surf Shopper, players must skim their worm across water onto an island. This variation is played on maps specially designed for this, and an additional rule comes into play:

The variation is often played with TestStuff, which stops worms losing their turn after skimming water and also allows for firing the ninja rope while a worm is still in flight after skimming. In this case, a slightly different rule is used:

Played on specially designed maps, and with TestStuff enabled, this variation makes use of an additional rule:

The common Shopper rules KTL and ABL are usually omitted for this variation.

This variation was created in December 2008 by Crowe, originally under the name of Air Shopper.

This is a Shopper with bungee instead of ninja rope, and maps designed for bungeeing around. Players must attack from bungee or during flying. The use of TestStuff is required.

A variant without ninja rope, and with maps designed for parachuting around. Players must attack from parachute.

Played on maps designed with a circuit, this variation makes use of an additional rule:

Played on any regular Shopper map where it's impossible to drown, players must attack their own worms. The first to kill all their own worms wins the game.

This variation can only be played with Worms World Party, making use of that game's WormPot mode "Super Rope" and "Crates, crates and even more crates". It is also known as Ropes and Crates or RnC.

Shopper was first created around 1999 on Worms Armageddon. It was commonly known at the time as Rope Shopper to distinguish it from the original Team17 "Shopper" scheme, which did not make so much use of the Ninja Rope. Though it is unknown who originally created this variation, it is clear that one of the most important contributors from the very start was the player Dogma. With the creation of his Shopper map City Shopper (a colorised version of which can be found on the Worms Map Database here), he set the tone for the design and layout of Shopper maps for many years to come.

In the earlier days of Shopper, the scheme was commonly considered to be a game for newbies. The most popular roping schemes at the time were Roper and Proper, which required a lot more skill with the ninja rope than Shopper and did not rely on the luck of crates. Newbies would typically start practicing their rope skills with the Shopper scheme, and then move to the more difficult rope schemes as their skills grew.

Around 2002, the attitude towards the scheme had started to change. Many who were considered to be elite Roper players had left the Worms community and took with them their strong dislike of Shopper. The Shopper scheme became more and more popular, passing Proper as the most popular scheme on WormNET.

In 2004, Star Worms created the Wall-X-Wall Shopper, a variation of the Shopper scheme which became very popular very quickly.

The scheme has featured consistently in competitions, featuring in every year of the Worm Olympics from when it started in 2006 to when it ended in 2016, and in cups and tournaments hosted on The Ultimate Site between 2010 and 2019.