Jump to: navigation, search
(Up to Tricks and glitches (second generation)) 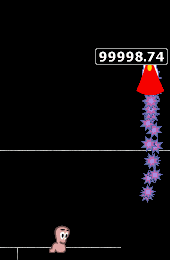 When in flight, the Super Sheep (and Aqua Sheep) use a different method of movement than most other game objects. The sheep is not affected by gravity and moves at a constant speed; however, instead of having a "velocity" like other objects do, the game manually moves the sheep towards the respective direction each frame.

Because the normal collision logic is not used, the game doesn't check for obstacles between the current and next frame's positions. Therefore, if there's an obstacle between these two positions, the super sheep will appear to "fly through" the obstacle.

In the attached replay, Deadcode has first flown an Aqua Sheep in the desired trajectory through a nearly empty map. Afterwards, the map was recreated so that any space not taken by objects (worms and the sheep) at any time was filled with land. The resulting map contains the minimum free space required to fly the sheep through the same trajectory.