On systems with multiple monitors, the screen may flicker excessively upon start, or before and after a round. This is due to the way Windows handles resolution changes, and is not something that can be fixed by the game. However, if this bothers you, this can be worked around by enabling Windowed Mode, which removes the need for resolution changes. 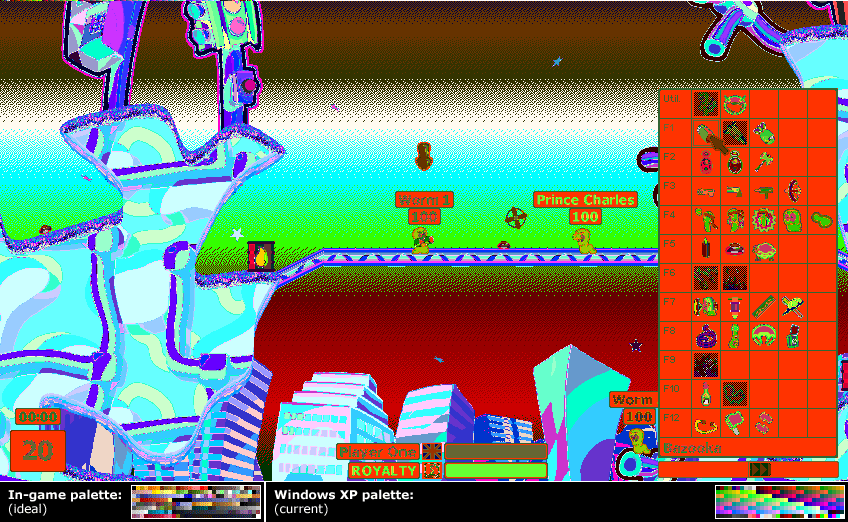 Some people have also experienced hearing no sound effects or speech when their sound configuration is incorrectly set to a surround sound system, despite them having only stereo speakers. Please check your sound card's configuration to ensure it's set up to match your speaker configuration.

I use Ctrl+Home to lock the camera to the current worm, but it stops working for some teams in the middle of a match!

This is a known issue in Worms Armageddon 3.8, and will be fixed in a future update. It is caused by the Super Sheep or Aqua Sheep crashing into terrain while flying, or the Aqua Sheep disappearing off the bottom of the screen. To work around this issue, you can cause the sheep to fall by pressing space just before it hits terrain.

This is usually caused by a software firewall blocking the connection attempt. You will need to find the option in your security software which controls blocking connection to IRC networks, and disable it. This might also be caused by security features in the routers of some ISPs; in particular Comcast's xFinity Advanced Security has been reported to block access to WormNET.

This problem is usually caused by an incompatibility between Windows 7, multi-core processors, and wkPackets (a former dependency of WormNAT2). The latest version, available from the WormNAT2 page, addresses this problem. Note that this problem may occur even to clients merely joining a game when wkPackets is enabled. To fix this, please delete wkPackets.dll from your Worms Armageddon directory.

You probably tried to patch WA when it did not need patching. Uninstall the game and try installing only the latest update. Alternatively you might have installed an update intended for the CD version of the game on the Steam or GOG editions. Please use the installation and update tools provided through the Steam or GOG platforms to keep your game up-to-date.

The game crashes when selecting the OpenGL Graphics API