Difference between revisions of "TnTower"

(Up to Scheme ideas or Tower Race) 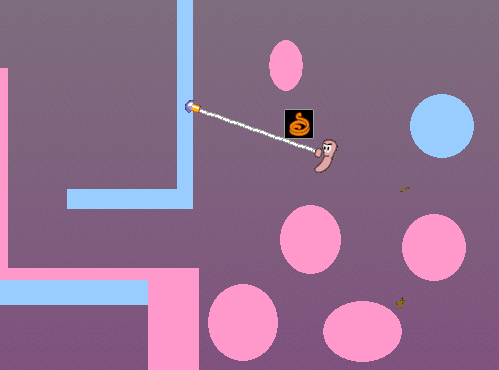 Roping through the obstacles without hitting the red objects.

TnTower, also called TNT Tower, is a Tower Race like scheme, but the maps obviously differ from Tower maps and the scheme has some more restrictions.

The difference between Tower and TnTower is the fact that players are not allowed to touch red obstacles in any case. There are also blue objects on the map which players have to touch to proceed through the map, with the goal to reach the finish. Of course the colors may differ, but instructions displayed on the map should show which colors are touchable and which are forbidden.

The name TNT Tower has been chosen because of the immediate fail which occurs when touching red objects, like you hit the fuse of a TNT packet - you got no chance to survive then.

The following rules are set additionally to the Tower Race rules:

The scheme settings are pretty similar to the Tower scheme, with the following exceptions:

Additionally, some RubberWorm settings may increase the joy of playing this scheme:

Teststuff can be enabled but is not actually needed to play the game; it may add interesting possibilities to the game, especially the Indian Rope Trick and BattyRope.

The first official map can be found here.