Mines are incredibly common in the Worms games, largely due to the fact that they randomly appear on the landscape under certain scheme settings, similar to Oil Drums. The way mines bounce is identical to a Grenade on the MAX bounce setting (bounces reduce the horizontal speed by 4% and the vertical speed by 40%). Mines are activated by having a worm come close to them; the detection range is a 45° tilted square with a radius (distance from center to vertex) of 48 pixels. Up to 50 HP of damage can be done to a worm by the mine.

Mines that start on the landscape can have fuse lengths between 0 and 3 (random or fixed) and may occasionally be "dud" mines, that just give off harmless smoke rather than exploding, depending upon the scheme settings. The Worms Armageddon update v3.6.28.0 allows fixed mine fuses from 0 to 127 to be selected, although a fuse length of 4 results in a random fuse.

Placing a mine will always give you a minimum of five seconds of retreat time, even if the scheme options are set to a lower value.

In W2, WA and WWP, a mine placed by a player always has a fuse time of 3 seconds. These mines are useful for directly placing an explosive downwards that could explode in mid-air - especially from a Ninja Rope, Bungee, Parachute, or Jet Pack. In Worms World Party, mines placed by players have the same colour as the team that placed it, but they still function exactly the same.

WormsDC can support a maximum number of 20 mines on screen at a time, including mines placed by the terrain generator. Dropping a 21st mine causes the game to crash.

The probability for a mine being a dud works in a similar way to how Crate Probability works. There is an array of 6 entries that holds values representing "normal mine" and "dud mine". When a mine is triggered, one of these values is chosen then deleted from the array. When the array is emptied, it is reset. This information allows a player to know that the odds of a mine being dud increases as mines are detonated.

A mine only has the possibility of becoming a dud if it has a worm target within a certain range at the moment of would-be detonation (not the same range as mine triggering range). If the first 5 mines in a game are not duds and have a worm target within range, then the sixth mine to detonate is guaranteed to be a dud (assuming it also has a target within range). There can never be more than 10 non-dud mines in a row (assuming they all have a target in range, and none in-between don't).

Dud mines can be detonated in Worms World Party and versions of Worms Armageddon before the 3.6.21.1 Beta update. See Dud mine explosion for more details. 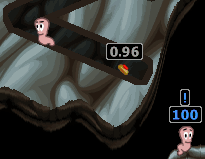